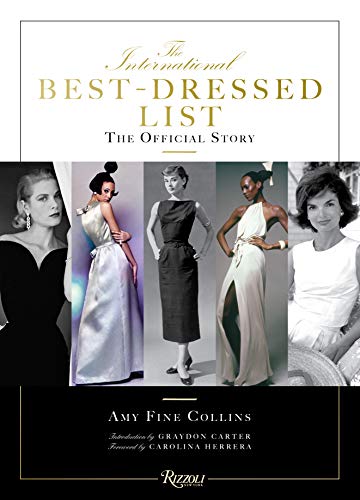 Reseña del editor This spectacular volume is a visual history of the much lauded and highly visible International Best Dressed List (IBDL) that was launched by Eleanor Lambert, Godmother of Fashion, in 1940. Since its inception, the list has become a barometer of style and today it is considered the highest honor a sartorial savant can receive. The list reads like a who s who of the most glamorous women and men from the worlds of high society, aristocracy, Hollywood, celebrity, fashion, art, culture, and media. This volume will tell the story of the list through decades of gorgeous photography of the chosen swans of style, elegance, and grace, including such icons as Marlene Dietrich, Wallis Simpson (Duchess of Windsor), Babe Paley, Marella Agnelli, Gloria Vanderbilt, C.Z. Guest, Madame Chiang-Kai Check, Grace Kelly, Jackie Kennedy, Audrey Hepburn, Twiggy, Bianca Jagger, Tina Chow, Queen Elizabeth, Princess Diana, Angelica Huston, Lauren Hutton, Carolyn Roehm, Nicole Kidman, Michele Obama, and Beyonce, to name but a few. In 1968 men were added to the list, including Fred Astaire, the Duke of Windsor, Gianni Agnelli, Cary Grant, Harry Belafonte, Bill Blass, Tom Wolfe, George Clooney, David Beckham, David Bowie, and Jeremy Irons. A reflection not only of the evolution of fashion over time but of the upper echelons of society and culture, this rich history is told from the perspective of writer, IBDL Hall of Famer, and list insider Amy Fine Collins, and features archival and contemporary fashion photography of honorees who have graced the list through the decades, accompanied by entertaining anecdotes, exclusive insights, and behind-the-scenes goings-on that shed light both on the selection process, and the zeitgeist of the times. Biografía del autor Amy Fine Collins was a special correspondent at Vanity Fair for over 20 years writing features about fashion, art, design, culture, Hollywood, and society. An arbiter and co-owner (with Graydon Carter, Reinaldo Herrera, and Aimee Bell) of the International Best Dressed List since 2002, she was inducted into its Hall of Fame in 1994. Long a muse to artists, photographers, and designers, including Geoffrey Beene and Thom Browne, Collins is a frequently consulted advisor and commentator on fashion and is active at the Metropolitan Museum of Art s Costume Institute, on whose Visiting Committee she sits. She was previously style editor at Harper s Bazaar and House and Garden. She has written or contributed to over a dozen books. Graydon Carter was Vanity Fair s editor in chief from 1992 to 2017. His next venture is Air Mail, a digital international platform, to be released summer 2019. Fashion designer Carolina Herrera was inducted into the IBDL s Hall of Fame in 1980.